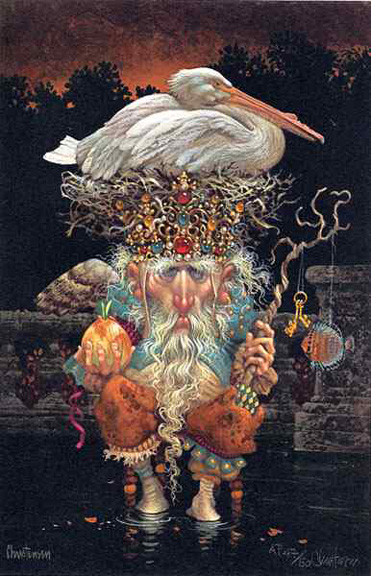 Sometimes when I paint, I have very specific symbology. It's almost linear - the narrative carries you right through very specific meanings. This isn't as much that way. It's more of a presentation of ideas from which an overall feeling is arrived at - based on a lot of little ideas, but pretty open ended. It's one of those pieces I tried to keep fluid enough that it was open for individual interpretation.

It was done with a lot of affection. He's a ridiculous character, but yet somehow I find him charming. You can enjoy him. Even though it is at twilight, it's not a dark picture. Although he's fairly immobile because this pelican has built a nest and is sitting on his head,the pelican is actually a positive symbol. In some places, it's used as a Christ symbol, because the pelican is said, in legend, to pierce its breast with its beak, and feeds its young with its own blood. That's not true, but that's what has been said.

Onions are also layers of meaning. They connote that there is a lot more there than meets the eye. Because you can keep peeling the layers back. Maybe the old man is an onion too, because he looks like the onion on the outside. But if you peel back the layers, you may discover incredible life and depth that does not necessarily show at first glance. With all its potential negative images of a little man left out in the cold who thinks he's in power, but he's not, you can still love him. -James Christensen