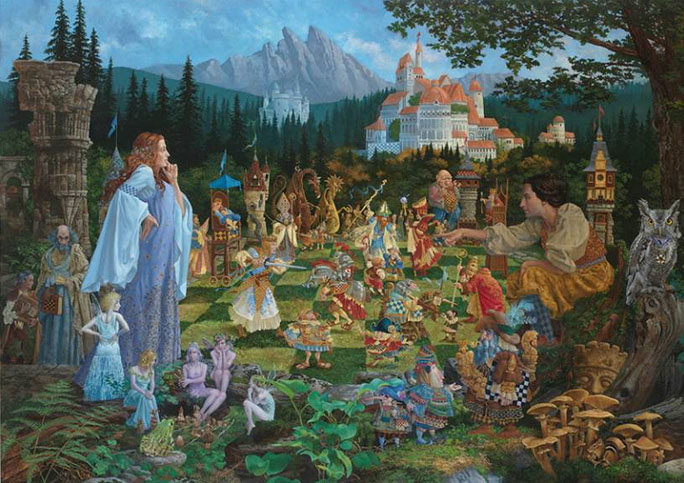 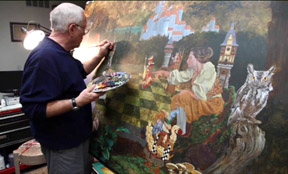 There are 1,327 named openings and variations to a match in The Oxford Companion to Chess, but how can a player remember any of them when the day’s spectators include a pair of dragons? “Actually, I don’t think anyone is worried about them at all,” laughs the artist James C Christensen. “They enjoy a well played game. It’s the little guys with the lances that get ornery when they are captured.”

Welcome to The Chess Match as imagined by James, the professor of the imagination. “These characters are quite passionate about the game. You’ll notice that they’ve incorporated the checkerboard pattern into their clothing and even onto the castle walls. But, they’ve only learned the game as distant observers, somewhat like you or me getting fascinated over a rugby match on the Aussie Channel. We could get all excited, run into the backyard and form up a scrum but we wouldn’t know the nuances of the game. Still, we’d have all sorts of fun and maybe even lose some teeth in the process.”

“The two players remind me of Oberon, in red, and Titania, in blue, from Shakespeare’s Midsummer Night’s Dream, each with their own castles and followers. Instead of playing with the traditional black and white pieces I was going to tip a hat to Alice in Wonderland by using red and white. From a design point of view, it was a little boring,” reveals Christensen, “so I went with blue instead of white. I didn’t think much about it until a friend stopped by and pointed out that I happened to choose the colors of Utah’s own Holy War--the University of Utah (red) vs. BYU (blue).”

As for the field of play, it’s classic Christensen. There is little doubt that the two queens, one with her magical staff and the other with her broadsword, are the most powerful players on the board. The kings, being slightly less so, have compensated for their diminutive stature with rather tall thrones. At this point in the game, the blue king has opted for a nap, while the red king does his best to direct traffic with a staff not as potent as his queen’s.

“I had fun playing the different pieces off of each other,” relates James. “Knights, castles and kings all employ minions and ogres to move them about the field. The red bishop is very ‘Rome’, as if he has just arrived, ornate mitre and all, from a conference at the Vatican. His counterpart is a red-haired, crazy druid running around (technically, diagonally) with a bunch of skulls on his belt. You have the Napoleonic, Great Garabaldi pawn in the foreground very serious and very fired up for his role while his opposite number seems to be having trouble mustering any real sincerity.”