Artifacts Gallery - City on the Hill by James Christensen

City on the Hill by James Christensen 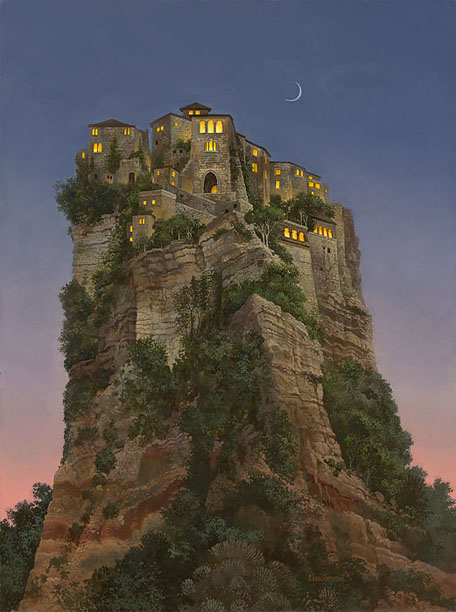 "City on the Hill" by James Christensen

You are the light of the world. A city that is set on a hill cannot be hid. Neither do men light a candle, and put it under a bushel, but on a candlestick; and it gives light unto all that are in the house. Let your light so shine before men, that they may see your good works, and glorify your Father which is in heaven. – Matthew 5:14-16

I took the train from Rome to Umbria one year. As the sun set across the countryside tiny lights began to twinkle and I realized they were the little hill towns, each shining in the darkness. As a somewhat weary traveler, far from home, it was reassuring that night on the train to see the tiny little lights that shone up and down the valley, knowing that each glowing dot represented life.

It occurred to me that this is what the Savior was talking about in the Sermon on the Mount. Back then, people didn’t have television or photography or any other kind of visuals, so Jesus taught using things they would be familiar with, such as a city on a hill. As in the days of Christ, the light from these ancient hill towns would have served as a guide, offering direction and comfort to travelers, so it was important to let that light be seen—to let it shine. I’m always impressed with the way the Master could use a simple analogy to teach a profound truth. One of the things I enjoy doing in my work is depicting a scene or moment like this in a way that helps people understand why Jesus used a particular image or example.